Salvage Operation is a mission type in Deep Rock Galactic.

The Dwarves are sent in to clean up a failed mining operation and must repair broken down Mini-M.U.L.Es and power up an abandoned Drop Pod. Salvage Operation missions have multiple primary objectives which must be completed in order. They are the third unlockable mission type, the first being Egg Hunt. 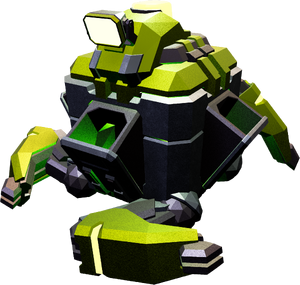 Legs are attached by holding the leg and then interacting with the corresponding Mini-M.U.L.E. Once all three legs have been attached, the Mini-M.U.L.E must be repaired. Repairing a M.U.L.E will reward the team with between 40-60 Nitra and 40-60 Gold.

Although minerals cannot be deposited into Mini-M.U.L.E.s, being near one while the Veteran Depositor perk is equipped grants the defensive buff.

After all of the Mini-M.U.L.Es have been repaired, a button will appear on the back of The M.U.L.E. Once pressed, the Mini-M.U.L.Es and the M.U.L.E will dock with the broken down Drop Pod, allowing the next stage of the mission to begin.

Salvage Operations take place in a linear cave system, with one small starting room branching out into a large cavern containing the mission objectives. There are short tunnels that branch out of this main cavern, which always lead back to the main cave. One end of the tunnel is blocked by Compacted Dirt, while the other end is open to the cave.

Broken Resupply Pods can generate anywhere in the caves. This is unique to Salvage Operations. They appear almost completely buried in the ground, with only a small portion sticking out. Directly above them is a tunnel created by the resupply originally dropping in, making those resupply pods highly noticable thanks to Terrain Scanner. After repairing them, they have a chance to give 0 to 2 resupply racks and up to 2 can be generated per mission, although this is very rare.

The amount of Mini-MULEs to salvage differs depending on the cave complexity and length. The payout is affected by Hazard Bonus.