Resupply Pods are used to refill Equipment ammunition. All classes are able to order a resupply using 80

Once the Resupply tool has been equipped, a hologram of the Resupply Drop will appear in front of the player. Once ordered, a glowing beacon will appear on the ground, and the pod will begin drilling downwards towards the beacon. It's important to note that if you're standing underneath the Resupply Pod as it lands, it will instantly down you.

After the Resupply Pod lands at the beacon, four racks will extend from the pod's sides. These racks can be interacted with to refill 50% of a player's ammunition (rounded up), and half of their overall health.

If a Resupply Pod still contains ammunition, it will be visible to players holding the Laser Pointer. The Resupplier perk reduces the time it takes to refill ammunition, instantly reloads your weapons, and increases the amount of health gained.

In missions with the Low Oxygen Warning, the Resupply Pod will also provide oxygen just like the M.U.L.E. does.

The Resupply Pod can damage bugs or dwarves when landing.

Broken Resupply Pods can generate in Salvage Operations. They appear almost completely buried in the ground, with a small portion of the top of the pod sticking out of the ground. Directly above them is a vertical tunnel created by the resupply originally dropping in. They are very similar to a normal resupply tunnel, although the tunnel is smaller and smoother, most likely to give the effect of the resupply having been there for quite some time. Broken Resupply Pods have a 60% chance to give a single resupply rack, 15% to give two resupply racks, and 25% to give no resupply racks. It takes 20 seconds to repair the broken resupply pod by yourself. 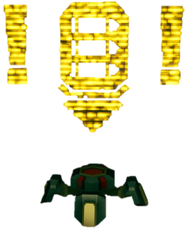