Radioactive Exclusion Zone is one of the biomes of Hoxxes IV. They usually have big open spaces, connected by wide tunnels. The Radioactive Crystals, while dangerous, do produce light. The caves themselves are generally empty with very few living things around. The air is mixed with ash like dust particles. The rock forming the caves is sturdy, taking 3 hits to destroy it.

The biome-specific hazard for Radioactive Exclusion Zone are Radioactive Crystals called Volatile Uranium, which irradiate any Dwarf or Creature who gets too close and slowly eats away at their health. It can be destroyed by directly hitting its light source with the appropriate weapon or simply smashing it with a pickaxe. There are also Spider Webs which, when passed through, will cover the player in webs, reducing movement speed and placing an effect on the screen that obstructs vision. These webs can be burned with a Flamethrower or most of the other fire sources.

Several enemies have a unique radioactive-themed variation that appears instead of their regular counterpart. Their attacks are also affected, with some such as Glyphid Exploders, Glyphid Praetorians and Glyphid Swarmers leaving behind clouds of radiation when killed. Radioactive Exclusion Zone enemy variants can be far more resistant to radiation than creatures found elsewhere on Hoxxes. Most Glyphids can be encountered in Radioactive Exclusion Zone, including Spitball Infectors, Cave Leeches, and Glyphid Dreadnoughts. Most Glyphids also have a slight radioactive glow in the darkness, making them easier to spot

Radioactive Exclusion Zone contains sparse and highly irradiated flora, along with dead trees. The Cave Vine is unique to this biome, while creepy, are harmless and will at most be a mild nuisance.

Enor Pearl, with Umanite being abundant and Enor Pearl being scarce. 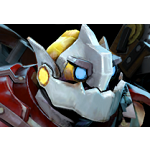