Point Extraction is a mission type in Deep Rock Galactic.

A huge deposit of a glowing, blue crystal named

Aquarq has been located, and the Dwarves are sent in to extract as many as possible. The Mine Head, a heavily armored mining platform, is sent in to assist you. Point Extractions are the third unlockable mission type, the second being Salvage Operation. 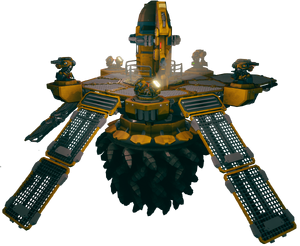 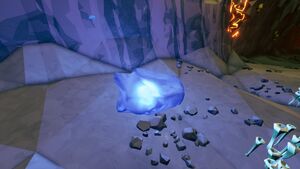 An Aquarq extracted from the walls

Aquarq. The Drop Pod lands in the cavern, along with the Mine Head, which lands shortly after the Drop Pod lands. The Mine Head acts as a central playing point throughout the mission. Similar to On-site Refining, the M.U.L.E. is not present, and resources gathered by the team must be deposited into the Mine Head.

The Aquarq that must be collected for the primary objective are embedded in the walls of the cavern. Small, blue crystals dot the location they are buried, and they must be dug out using the pickaxe or other terrain destroying tools or weapons. Aquarq are large resources, and must be carried back to the Mine Head by hand.

After the primary objective has been completed, a red button on the Mine Head platform will appear, and can be interacted with. Pressing the button using the [Interact] key ("E" by default) will launch the Mine Head rocket and Mission Control will announce that they will send in the Drop Pod to extract the Dwarves after the rocket has been secured at the Space Rig. The Drop Pod will take two minutes to arrive, after which the Drop Pod will land and open for three more minutes before departing, with or without the Dwarves.

Point Extraction missions take place in large, expansive open caves with various height levels. They always have at least one small tunnel that leads to a medium sized cave. Keep an sharp eye out for this cave, as it can be hard to spot. The Mine Head will always be positioned in the general center of the main cave.

The number of Aquarq to collect is dependent on the length of the mission.

Unlike all other mission types besides On-site Refining, Point Extraction missions have Dystrum as a possible secondary objective.