On-site Refining is a mission type in Deep Rock Galactic.

Management has detected Liquid Morkite Wells on Hoxxes, and have sent in the Dwarves alongside a Mobile Refinery to collect and process the Liquid Morkite directly on Hoxxes before sending it back to the Space Rig. 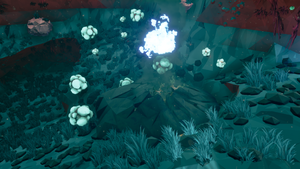 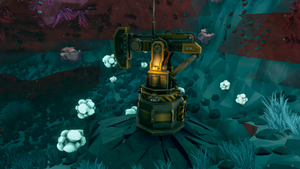 The Pumpjack which extracts the Liquid Morkite 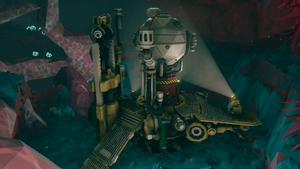 Once the Drop Pod has landed, the Mobile Refinery will soon follow. It is a large construct similar to the Minehead in size and appearance, with several moving parts and structures. A rocket is found in the center attached to a spherical storage tank on top, which is used to store the refined product. Unlike the Minehead the Refinery does not have any defensive utility besides Floodlights, though it is not vulnerable to any kind of attack.

In On-site Refining, there are always three different Liquid Morkite Wells located throughout the map. They can be identified by the sound of spurting liquid, flame exhausts and dark blue spots along the walls similar to the presence of a Gemstone such as Aquarq or Jadiz. The Well itself is a dark blue color and spurts a murky, dark turquoise liquid constantly, similar to solid Morkite. Upon locating a well, it will show up on the Terrain Scanner.

When a Well is located, the Dwarves can call in a Pumpjack which is deployed by Mission Control on top of the Well. From there, a Pipeline must be constructed to connect the Refinery to the individual Pumpjacks. Pipelines start at the Refinery and are constructed by placing nodes which automatically form Pipeline Frames between themselves when placed. In order to place a node, press the [ACTIVATE] key ("E" by default) on either one of the Refinery's Pipeline starting points or an existing node to bring up a hologram of where the node can be placed. The hologram will shine blue when a node is ready to be placed, and red otherwise. Other players are able to see this hologram while you are placing a node. Be mindful that you cannot use any tools or weapons while placing a node.

These nodes must adhere to several rules in order to connect to each other and to the Pumpjack; they must be placed on solid ground (though they will support themselves if the terrain they stand on is broken), they must be within nine meters of one another, must not exceed thirty degrees in angle and cannot be blocked by any kind of terrain (however, nodes will automatically clear out non-intrusive space alongside them when placed successfully). Note that pipelines can intersect each other. Nodes can also be removed by striking them twice with a pickaxe, which will delete the node and wind the Pipeline back to the previous node. Pipelines are also immune to friendly fire.

The Pipelines between nodes, whether they are Frames or fully constructed, can be rode upon by standing on top of a Pipeline and pressing the [ACTIVATE] key ("E" by default). This allows a Dwarf to "grind" along the pipeline through a special Board which is automatically equipped. While grinding Dwarves will automatically move along the Pipe trail at a set speed slightly faster than walking, though they can look around and fire weapons freely. The angle of a Pipeline can influence the speed. Grinding along the Pipelines provides a significant mobility boost, and as such it may be worth considering placing Pipes in such a way as to build up maximum speed when grinding in one direction. Obstacles on a pipeline (like a crossing Silicate Harvester) can cause the grind movement to abruptly stop. Pipelines that intersect at the same level, however, do not impede grinding.

Pumpjack requests, Pipeline node placement and Pipeline construction may all be conducted independently of one another, allowing a team of Dwarves to be flexible in their approach to completing the mission. They may choose to focus on one Pipeline at a time, or may opt to spread out and build all three at once. The entire process must be repeated three times for every Morkite Well located in the cave. Once this is achieved, the refining can begin.

Once all three Pipelines are constructed, the Refinery is able to be started up by pressing a button on its control panel. The noise produced by the Refinery will attract Creatures. This triggers multiple Swarm waves to attack the Dwarves until the end of the mission (even after the Refinery stops). This segment plays out much the same as other "survival" segments found in gamemodes such as Salvage Operation and Point Extraction, where the Dwarves must wait for the Refinery to completely process all Morkite siphoned out of the wells. The progress of this period is measured by a percentage UI on the top right of the screen - processing is complete when it reaches 100%.

Occasionally, some of the nodes on at least two Pipelines will leak, interrupting the refining progress. Mission Control will alert the Dwarves when this happens. Despite being called leaks, they will not cause any loss of progress when they happen, and you can take as long as you need to repair them. A leaking pipeline can be identified by the red glow it emits, the liquid spurting out, and the low beeping noise emitted. The Terrain Scanner can also be used to locate which nodes are leaking by the dark red orbs placed along the Pipelines. To repair a pipeline, simply stand over it and hold the Use key until it is fixed, but beware that there are often creatures attacking the Pipeline (They do not need to be killed for the repair to be successful).

The frequency of the leakages and how many nodes are affected depends on the player count and, to a lesser degree, the Hazard Level. With just one or two players, only two Pipelines will leak and there will only be a few leaking nodes. With a full team, all three Pipelines will usually leak and will have several broken nodes. The Hazard Level primarily influences how often the pipes break - playing on lower levels will usually only result in two leakages, while higher levels will often cause three to happen.

It should be noted that leakages are inevitable and are pre-set to occur at specific intervals throughout the refining process. The amount of enemies killed does not affect when or where leakages happen. Despite enemies appearing to attack the nodes, this is purely a cosmetic effect to stop players from easily repairing broken nodes.

After the refining has been completed, the control panel button will activate again. Pressing it will launch the Refinery's Cargo Rocket, completing the primary objective. Unlike the Minehead rocket's return to the Space Rig there is not a countdown timer - the Drop Pod will arrive the moment the Refinery's Rocket leaves the planet. As with Point Extraction, the Dwarves have three minutes to make it inside the Drop Pod.

Enemies can spawn upon mission start, or randomly throughout the mission, but every few minutes, a Swarm will occur, which will be announced by Mission Control, and will cause Dwarves to be attacked by an increased number of enemies. (However, when the refining process starts, instead of periodic Swarms, the Dwarves will face a single constant Swarm).

Caves in On-site Refining are similar to those in Point Extraction in terms of structure, being smaller, non-linear and generally spherical with a few small off-shoots which eventually wrap around back to the main cave. The Refinery will land either in the center or the edge of the map, while the Liquid Morkite Wells will spawn in randomized locations. Depending on the Cave Complexity level, the Wells will be found in harder to reach spots which will require use of the Dwarves' Support Tools to create a suitable path for the Pipelines.

Unlike all other mission types besides Point Extraction, On-Site Refinery missions have Dystrum as a possible secondary objective.