Movement is an essential aspect of navigating the caves of Hoxxes IV. Movement can refer to basic inputs used to move a player's character or to specific techniques and abilities employed by the Dwarves to get around. 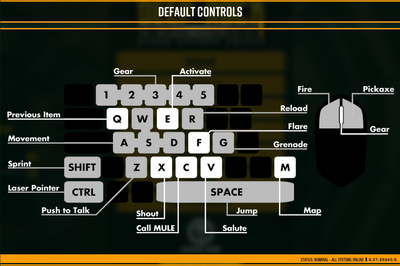 All Dwarves are capable of the same basic movement: walking (W, S, A and D for forward, backwards, left and right respectively), jumping (space bar), sprinting (shift key) etc.. Dwarves move at approximately 3m a second when walking and 5m a second when sprinting; certain modifications and Perks can be used to improve movespeed. Dwarves can reload their weapons when sprinting, and when jumping, a Dwarf rises approximately 1.2m high. When the player is in air and the Dwarf is touching a vertical surface they are within eye level of, they will grab the ledge and pull themselves up, commonly referred to as "Ledge Grab". This can only be done once until the Dwarf touches the ground again. The Dwarves have fairly fluid air control and can alter their direction when falling.

All four Dwarves bring utility equipment with them which aids them to get around the caves when running, jumping and climbing won't cut it. In addition, some Weapon Overclocks can also increase their mobility.