Mining Expedition is a mission type in Deep Rock Galactic.

The Dwarves have been sent into a cave rich in

Morkite, and are tasked with extracting the minerals inside. Mining Expeditions are unlocked from the start, and are the first mission type available to new players. 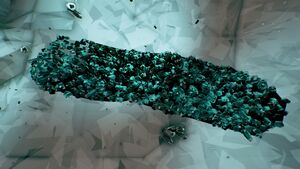 Morkite as it appears in the mission

The goal of a Mining Expedition mission is to collect a certain quantity of a shiny, dark blue resource called

Morkite. Morkite is exclusive to Mining Expedition missions. It glimmers slightly in the darkness, making it relatively easy to find. Once mined, the Morkite must be deposited into the M.U.L.E for it to count towards the quota. The amount of Morkite required to complete the mission varies based on mission length and complexity.

After the primary objective is completed, a red button will light up on the MULE to begin the extraction phase. Once pressed the Drop Pod will be called in to pick up the MULE and any surviving miners. It will wait for 5 minutes before departing, though the door will only open once the MULE has been secured, or at 15 seconds if by any reason the MULE can not reach the pod.

Enemies can spawn upon mission start, or randomly throughout the mission, but every few minutes, a Swarm will occur, which will be announced by Mission Control, and will cause Dwarves to be attacked by an increased number of enemies.

Mining Expedition caves are characterized by linear series of connected caves separated by smaller tunnels and passages between them with a "treasure room" full of resources at the end. The "treasure room" features an abundance of rare Crafting Resources and Gold, encouraging players to reach the end of the mission. During extraction, the Drop Pod will usually land far away, at the other end of the cave to the miners, making a hectic and intense escape through the long and linear caverns.

The required quota of Morkite differs based off the mission length and complexity. The payout is affected by Hazard Bonus.

The number of caverns (Including the "treasure room") in the level depends on the length of the Mining Expedition.