From Deep Rock Galactic Wiki
Jump to: navigation, search
This article may need cleanup to meet quality standards.
Please help improve this if you can. The Discussion page may contain suggestions.

Introduced in Update 26: Endgame - Part 2, Machine Events are random events that can spawn inside normal Missions with a 1/4 chance (25%), providing a challenging interaction. Machine Events reward players with Credits and XP bonus, as well as either a Weapon Overclock or a Matrix Core Cosmetic if they own a

Blank Matrix Core, acquired during the first stages of a Deep Dive and special Weekly Assignments. To activate the event, a player must own a Tritilyte Key — a reusable item that is automatically provided when a player promotes their first Dwarf — and put it into the Core Infuser. Then, they will be able to press four buttons around the main event structure. Once all buttons have been pushed, the Machine Event will start, a countdown timer set to 180 seconds (3 minutes) will appear. The player(s) must complete the event within that time, or it will fail, making the Core Infuser unusable for their

The Ebonite Mutation event will deploy an Overcharge Sprinkler that will assist Dwarves in dealing with an oncoming wave of Ebonite Glyphids. The machine will periodically spit out glowing canisters that can be picked up by running over it. This will grant Dwarves a temporary buff which greatly reduces their Power Attack cooldown. Ebonite creatures can only be damaged by melee attacks (including Impact Axes) and frozen. They can be taken down with 1-2 power attacks.

•  The objective is to kill enough Ebonite Glyphids to reach the points necessary in the allotted time. With Ebonite Grunts giving 1 point and Ebonite Praetorians giving 2 points.

The Kursite Infection event will deploy a Kursite Grinder to analyze the infection carried by certain enemies. These enemies are modified with blue skin and yellow crystals, they drop Kursite when they die, which decays shortly after the creature is killed. Once the Kursite is dropped from an infected enemy, a player must deliver it to the analyzer.

•  Only one type of infected variant will spawn and the objective is to collect a certain amount of Kursite in the allotted time.

The Omen Modular Exterminator event will deploy hostile Modular Extermination Towers which needs to be destroyed by exposing and shooting its green-colored cooling tanks. To expose these tanks, players will be required to stand on top of three different maintenance platforms around the tower until authorization is granted. Each platform will expose a different tower, which will be indicated in a pop-up display. Note that each tower will comprise multiple cooling tanks that each shares an equal portion of that tower's health.
The platforms are always linked to the same layer of the tower. When standing on the Core Infuser:

The cooling tanks are weakpoints with a multiplier of ×1 (so weapons with weakpoint damage do more damage to them).
The Omen Modular Exterminator also has a 70 % resistance to explosion, fire and frost damage.


• The objective is to destroy all the cooling tanks on the Modular Extermination Towers in the allotted time.

The Tritilyte Crystal event will have Mission Control drop a Nanite Bomb Dispenser nearby, which dispenses special explosive charges filled with nanite explosives. These charges must be picked up, carried to the crystal, and thrown at it until it is destroyed. They are considered heavy objects, so players will be defenseless while carrying it. The charges will blow up upon hitting the surface of the deposit, hitting an enemy, or when shot.

•  The objective is to destroy the Tritilyte Shard with nanite bombs in the allotted time. 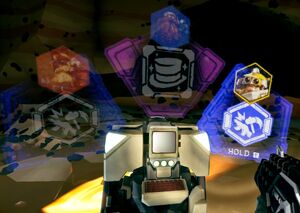 Players will need a

Blank Matrix Core to be able to receive the reward from the event; these are rewarded by completing the first stages of a Deep Dive and Weekly Assignments.

Upon successful completion of the event, each player can insert one

Blank Matrix Core into the Core Infuser (where the Tritilyte Key was originally used to start the event). The player will then be given three reward options, each being either a random class Weapon Overclock or a random class Matrix Core Cosmetic. Only one can be acquired. The core is always consumed, regardless of whether or not the player selects one of the rewards. If all previous rewards are collected, Mineral Containers of 120 crafting resources are instead available. The rewards do not scale with hazard difficulty.

Like the Lost Pack and Cargo Crate cosmetics, the Machine Event's Overclock rewards cannot be lost if the mission is failed or aborted, or if the player is kicked or disconnected, or if the game crashes. It can be lost, however, if the player's Internet connection is interrupted before finishing the mission.