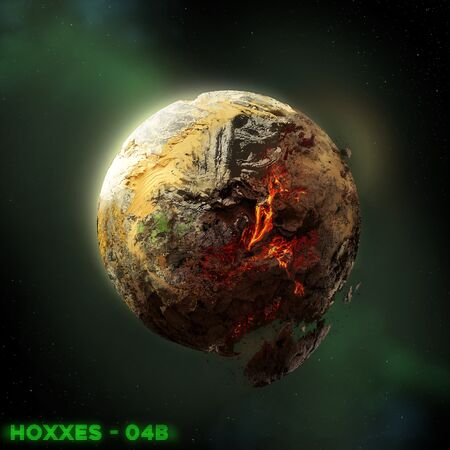 Hoxxes is a scorched, tidally-locked planet orbiting the blue star Creus, unique among the other planets in the system for her extraordinarily rich precious material deposits and extremely hostile environment. Only the mining corporation Deep Rock Galactic, known for a lack of safety precautions, is stubborn enough to continue mining in this sector, offering hefty paychecks and bonuses to those willing to brave the depths of Hoxxes IV.

The dangers include, but are not limited to: electromagnetic storms, gravity anomalies, tectonic instability, seas of sulfuric acid, and one of the most hostile ecosystems in the galaxy. The creatures of Hoxxes only grow more hostile and dangerous under the unending radiation from Creus and the biomatter and microorganisms left by other mining corporations. And if the pincers, teeth, tentacles, and altogether too many eyes of Hoxxes’ children isn’t enough to scare you away, rumors of even worse and much older, sinister, and alien things down in the deepest excavations abound.

Hoxxes's surface is composed of several unique continents, each with a different type of biome. These biomes provide not only differing cave layouts and complexities, but also contain more or less of certain minerals, which can help those who are looking for specific Crafting Materials. The flora of each biome is diverse and offer different traits that can be helpful when dealing with enemies or harmful.

Shallow Grotto is only accessible through the tutorial mission, and can only be played with Gunner in Solo Mode. Shallow Grotto contains various features from other planetary regions such as Glowing Blue Crystals and Spider Webs. Unlike other planetary regions, Shallow Grotto doesn't contain any crafting materials, and no secondary objective minerals are present. The cave is abundant in Morkite, which must be collected as the primary objective to complete the tutorial mission.

The cave generations are mostly the same, such things as tunnels between caves, ore placement and biome features are randomized.