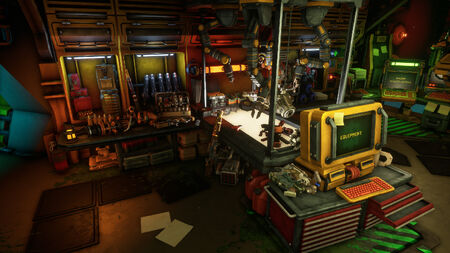 Deep Rock Galactic provides their employees with a huge arsenal of Equipment to choose from, designed to assist the Dwarves in extracting resources and eliminating threats. All of the classes carry several items of Equipment at once - a Primary Weapon, a Secondary Weapon, two Support Tools and a Throwable item (such as a grenade).

For weapons, a Dwarf has two choices for their Primary and Secondary Weapon slots. The alternative choice for a weapon slot must be unlocked through an Equipment License and then purchasing said weapons. Support Tools assist the Dwarves with mobility and utility - every class has a unique pair of Support Tools related to their job. Finally, a class can pick from one of three different Throwable options, though the latter two choices must be unlocked and purchased first.

Alongside these items, every Dwarf carries the same basic toolkit - a Pickaxe to extract resources and deal melee damage, an Armor Undersuit, the Laser Pointer to mark points of interest to the team, the Terrain Scanner which acts as a 3-D map, and throwable Flares which serve as temporary light sources.

Alongside personal Equipment, the Dwarves also make use of various Support Drops and Drones to assist them in the caves. Most of these only appear in certain situations, such as Bosco, which is only usable in Solo missions, designed to assist lone Dwarves with mining and combat.

Most types of Equipment can be modified through the Equipment Terminal. Players spend

Credits and crafting materials extracted from the caves to improve their gear in various ways. Players can also equip Weapon Overclocks on their Primary and Secondary Weapons, which can improve or alter the function of the weapon.

•  Each weapon has the same set of standard paintjob, which can be unlocked by purchasing upgrades.


Below is a demonstration applied to the Subata 120.

Additional Weapon Skins can be obtained through the game with Cargo Crates, Matrix Cores, or Supporter Upgrade DLC.

•  Each armor has a set of standard paintjob unique to each classes, which can be unlocked by purchasing upgrades.

Additional Armor Skins can be obtained through the game with Lost Packs, Assignments or DLC.