Elimination is a mission type in Deep Rock Galactic.

A nest of large Glyphid Cocoons has been located underground and the Dwarves are ordered to eliminate their various inhabitants: ferocious and heavily armored Dreadnoughts. Eliminations are the fourth and final unlockable mission type, the third being Point Extraction. 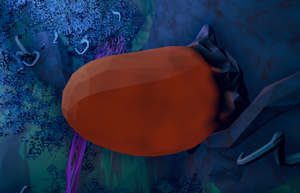 The goal in Elimination missions is to locate and destroy multiple Dreadnoughts, which are in their cocoons when the Dwarves arrive. Any Dreadnought variant can spawn from a cocoon, but the same variant can not spawn from two consecutive cocoons.

The cocoons appear on the scanner as bright red egg shapes. The cocoons themselves spawn near open areas to fight in and are surrounded by veins of blue organic material. They emit an audible heartbeat sound and are safe to approach, but take very little damage to break.

Swarms do not attack the players in Elimination missions, but smaller waves of enemies will occasionally attack, including while a Dreadnought Type is being fought. Since these missions are more combat focused, higher quantities of Nitra can be found on the walls to aid in calling Resupply Drops.

After the primary objective is completed, a red button will light up on the M.U.L.E to begin the extraction phase. Once pressed the Drop Pod will be called in to pick up the M.U.L.E and any surviving miners. It will wait for 5 minutes before departing, though the door will only open once the MULE has been secured.

Elimination caves consist of a small "starter" room typically lined with resources such as Gold and Nitra. There are usually a few tunnels to various caverns blocked by Compacted Dirt. These can be taken in any order to get to the Cocoons, though use of the player's Terrain Scanner will aid in locating them.

Once a Glyphid Cocoon has been shattered, any of the three types of Glyphid Dreadnoughts will appear. They will attack immediately, using a variety of attacks to incapacitate the Dwarves. These attacks vary for each Dreadnought type.

The number of targets to kill is based on the length and complexity of the mission.