Egg Hunt is a mission type in Deep Rock Galactic.

Alien Eggs has been located, and the company wants the Dwarves to retrieve them, for unknown reasons. Egg Hunts are the first unlockable mission type, allowing new miners to play missions other than Mining Expeditions. 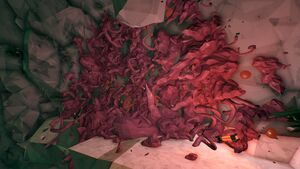 Alien Egg material as it appears on the wall 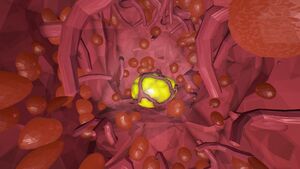 The Alien Egg after it has been extracted from the membrane

Alien Eggs. The mission takes place in a nonlinear cave system, and the eggs can be collected in any order. The eggs are embedded in the center of a pinkish-magenta membrane, which can be destroyed in a single pickaxe swing.

Take caution, as freeing an egg from the membrane will cause the ground to shake, accompanied by an eerie, distant Glyphid scream, possibly the mother of the egg alerting other bugs. Shortly after, either a swarm or a small horde of enemies will attack. Any of the eggs may, upon extraction, generate a swarm, but there is a limit to the amount of times it will happen:

The Alien Eggs are visible on the Dwarves Terrain Scanner, making them easy to find and extract. They are a heavy object like Aquarq and Jadiz, and must be deposited into the M.U.L.E to count towards the primary quota.

After the primary objective is completed, a red button will light up on the M.U.L.E to begin the extraction phase. Once pressed, the Drop Pod will be called in to pick up the M.U.L.E and the Dwarves. It will wait 5 minutes before departing, though the door will only open once the M.U.L.E has been secured.

The required quota of Alien Eggs differs based off the mission length and complexity. The payout is affected by Hazard Bonus.