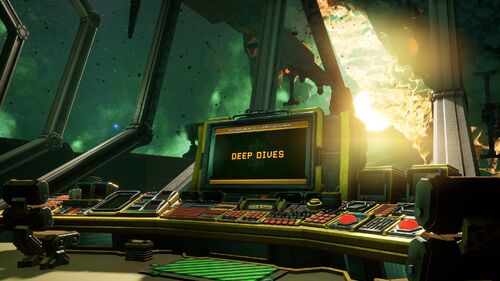 Deep Dives are an End Game mechanic that was introduced in Update 25: Endgame - Part 1. Deep Dives are accessible to the player once they have promoted their first Dwarf, while Elite Deep Dives also require the completion of a Deep Dive (only once). The mechanic consists of two pre-seeded, difficulty locked variants: Deep Dives and Elite Deep Dives. Each variant consists of three Missions each with two objectives each; totaling six objectives that must be completed to complete a full Deep Dive. Unlike in normal Missions, the Secondary Objective is replaced with another Primary Objective, and both Primary Objectives must be completed to move onto the next stage. All gear, ammo, HP, and mined Gold and Nitra will carry over from one mission to the next, and missions must be played back-to-back, making Deep Dives essentially one long mission. Deep Dives can be accessed through the Deep Dive Terminal located on the Space Rig. Players can view their quickest completion time for the Deep Dives at the KPI Terminal located in their Personal Cabin.

Players can run a given Deep Dive as many times as they want, however the rewards can only be received once per Deep Dive. Along with the Weekly Assignments, new Deep Dives become available at 11am UTC each Thursday.

Note that you must play as a promoted class to participate in a Deep Dive.

With the introduction of Deep Dives, three new hazard levels are introduced that can only appear within a Dive: Hazard 3.5, 4.5, and 5.5; these can only be found within Deep Dives.

Each Deep Dive has a randomly generated seed upon the weekly reset, which makes a Deep Dive's difficulty slightly different when compared to the general 1 to 5 Hazard levels of regular missions. 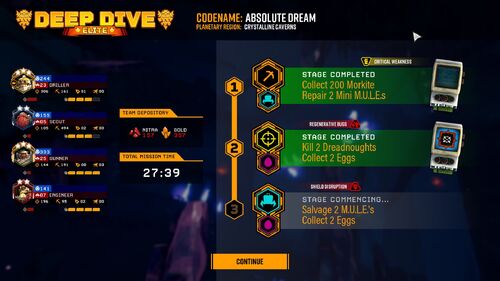 There are a total of 31 unique combinations of mission types. The primary and secondary mission types cannot be the same.

1 Does not include repairing the Drop Pod.
2 Only feature one refueling stop.

Completing each mission of a Deep Dive will grant the player a random reward as listed below:

Both variants of the Deep Dive will provide the same rewards from the same reward pool. Each reward can only be received once per variant, totaling six rewards every week.
Blank Matrix Core are given instead when all Weapon Overclocks are collected and a Mineral Containers of 120 crafting resources if all Cosmetics Matrix Core have been obtained.

The overclock that can be forged is determined when the player receives the Infused Matrix Core.

Note: It is not possible to get duplicate cores.