Deep Rock Galactic Wiki
Register
Don't have an account?
Sign In
Advertisement
in: Potentially Out of Date, Mechanics
English

Area Damage is, as its name implies, any type of damage being dealt in an area. The damage done in that area may not be the same everywhere. For most weapons, more damage will be done near the center than at the edges. The damage done isn’t affected by what is inside that area and will remain the same no matter the number of enemies.

The most common source of Area Damage in game comes in the form of explosive damage, but in practice any attack that deals damage in a sphere will behave the same.
Examples of non explosive Area Damage include the second part of the melee attack from the Pickaxe (Melee damage), the active See You In Hell (Disintegrate damage), Death Cloud explosion (Fire + Heat damage).
Area Damage can also come from attacks that don't do any health damage but affect temperature instead like the Cryo Cannon's Cold Radiance mod and Snowball overclock.

The damage will scale linearly between the two radii (in yellow).

Calculating the Damage Done at Any Range[]

We will take as an example a weapon with the following stats:

That means that weapon will deal: 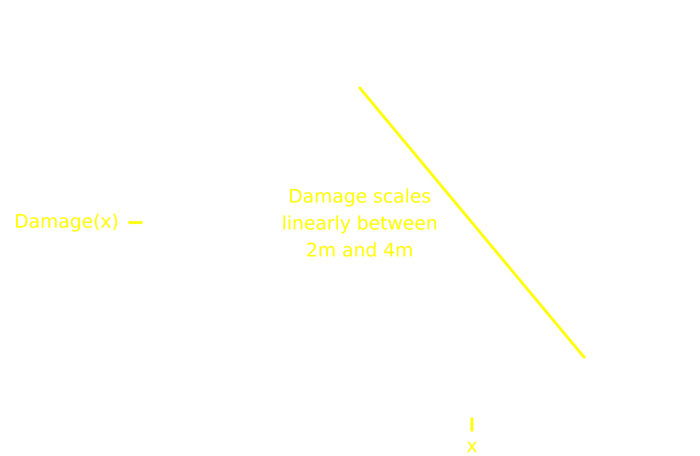 To calculate the damage done, since we know the damage scales between the two radii, that mean that the ratio of area damage

will be equal to the corresponding ratio of radius

From that point we can can deduce a formula to calculate the damage done Damage(x) depending on the distance from the center of the area x:

Using the above formula, we can find now find the damage done at any point inside the scaling area: